I know it’s been a while since I posted anything here – but I did say it would be for “interesting “ things only as I wasn’t going to Blog all my flights.

Anyway, this year (2017) is rating renewal – it is every two years so not too bad.  As part of the renewal, I need to spend an hour with an instructor and get my logbook certified, simple really.

Anyway today, I’d booked an hour with an instructor on G-DAZO which I haven't flown before.  It’s a Katana DA20 but with a 100hp engine rather than the usual 90hp I did most of my training in.

I was expecting to fly circuits as the weather – especially the visibility was marginal to put it mildly so I was surprised when the Instructor said we would do a local flight to the east over Kent.  So usual checks, engine start and taxi out to G2 the holding point for runway 09L at Redhill.  In the taxi, I’d noticed the aircraft seemed more powerful than you might expect from just an extra 10hp.  After clearance from air traffic control, it was line up on the runway and take off.  Then I really noticed the difference.  The aircraft accelerated rapidly and to stop the nose wheel bumping too much I eased back on the controls – bad idea as the aircraft immediately took off well below rotate speed with the stall warner going.  So level out and then climb out and wow this thing can climb compared to the other (90hp) Katana’s.

Departure was via Godstone Station and the visibility was so poor so I stayed at 1400 feet even past Gatwick airspace.  Instructor got me to fly to Bewl Water and there pointed at a patch of sunshine a few miles away.  Next thing he said, fly there and climb through that hole in the cloud.  This was definitely a new one on me.

We got there and I did a spiral climbing turn into the hole – it was weird as I lost all spatial sense of direction and ended up flying on instruments to get through the gap.  Then suddenly it was into clear air and bright sunshine just above the clouds – such a massive difference from a 1000 feet below.
It was a definite wow factor flying at 120mph with the aircraft just skimming the clouds – never been above cloud before (not permitted on my licence) so this was really something else.  Instructor got me to do a few turns as above cloud the horizon is not as defined as solid ground – first turn wasn’t great but on second one I'd cracked it.

After a bit of general flying around and getting used to things, it was look for a hole to get back down.  I spotted one and did a spiral descent at speed straight through the gap and then into the murk and poor visibility below again.  Instructor then set a VOR bearing to get us back to Redhill.  Been a while since I followed a VOR but sort of managed it – just about.

Even close to Redhill Airfield , I couldn’t see it so followed landmarks to get there.  Then it came into view and it was a downwind join for 08L.  As I’d never landed (or even flown) this aircraft before my approach was “interesting” and I ballooned on landing.  Still Instructor was unconcerned and signed me off.

I’m hoping to fly G-DAZO solo next week weather permitting.  If I do I’ll post a brief review and a picture of the aircraft here.


Pic below taken by Instructor and me looking terrified….. 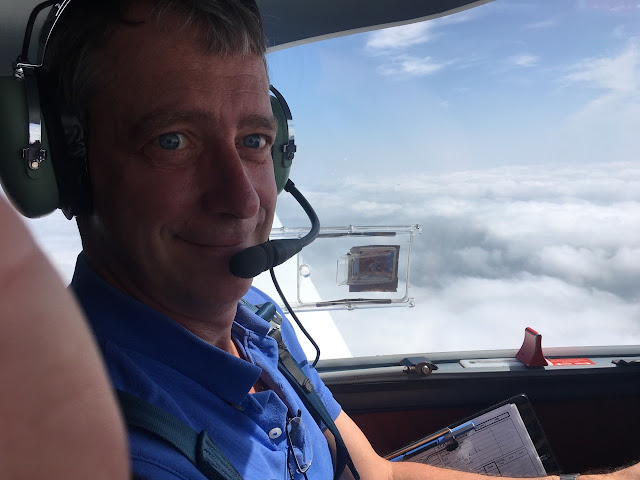