Runway 25 and back to the Katana.

Well I’ve been doing a bit more flying in the PA-28 and even had my first passenger (Penny) along for a ride.  Because of the recent heavy rain the grass runways at Redhill are all closed and they are using an unlicensed runway (07 / 25 which is actually a taxiway) for take-offs and landings.  Long ago in my training I have taken off and landed on this runway and my thoughts at the time were it is short, narrow and has a curve in it.

Before Pilots can use the taxiway runway they have to do a short training course with an Instructor and as the weather today was looking good I’d booked an aircraft and instructor to do the training.  As the PA-28 was not available I booked a Katana DA-20-A1 G-BXPD which is the aircraft I did my PPL Licence test in.  I hadn’t flown it since then (August 2013) so I’d get a double benefit today, approved to use Runway 07 / 25 and get certified on the Katana again.

Got to Redhill on time and it was a beautiful but cold day.  Usual checks around the Aircraft and get myself acquainted with it again and after about 10 mins I was ready to go.

I had a bit of a problem talking to Redhill ATC as they couldn’t hear me but moving position and resetting the headphone jacks seemed to clear the problem.  Then it was on to taxi to holding point B2 and get ready for take-off.  After power checks I was cleared to take-off and by now it was obvious the runway was both narrow and curved.  Still no problems with take-off and the circuit and soon felt at home back in the Katana.  Coming into land was a different proposition – the runway was really narrow and the curve was obvious.  Still made a reasonable approach, got the aircraft down and had to steer it on the landing run which was a bit interesting but OK.  Touch and go’s are not allowed so I was sent to hold at D1 while another aircraft landed behind me.  Then I was cleared to backtrack (taxi back along the runway) and line up for another go.  Take-off was fine as was circuit and I got a better approach this time.  I was a bit slow at the threshold and bounced the aircraft a bit and again had a slightly erratic steering around the curve.  Then it was backtrack and line up for another go.  This time it was better, I got the speed right and although I bounced a bit the landing was Ok.  Instructor said he was happy and I was to taxi back to the hanger.

So that’s it, now qualified to take-off and land on the unlicensed runway and certified for the Katana DA20-A1 again.  Result. 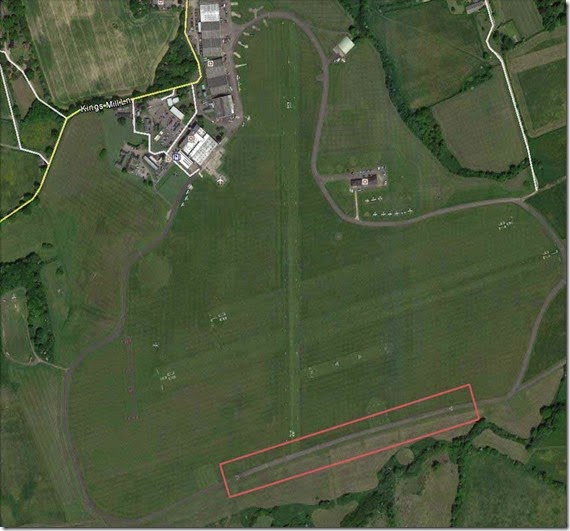 Katana and the PA-28 at Redhill – both of which I am certified to fly at the moment. 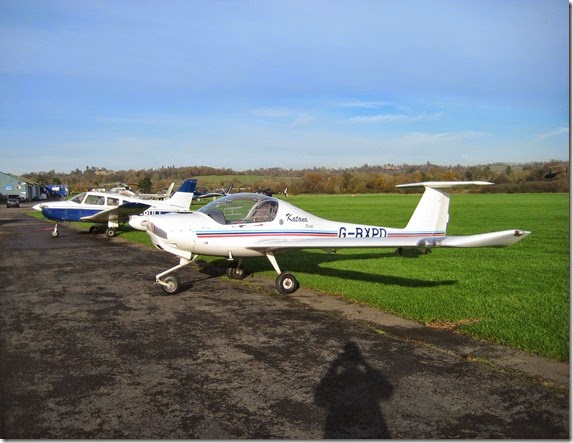