Now I’ve got my licence I’m converting to two other aircraft – a Diamond Katana DA-20 C1 and a Piper Warrior PA28.  Both my previous bookings were cancelled due to bad weather (mostly fog and low cloud) but today looked good and I had a booking for the DA-20 C1, registration G-NIKK

It’s a Katana – similar to the aircraft I did my training and skills test in – but different.  This one has a fixed pitch propeller, a fuel injected engine, a mixture control and 125BHP Continental engine.  It’s also a bit bigger than the DA-20 A1 and even has a bit more room in the cockpit.

First stage was a briefing with the Instructor about the differences – mainly the engine, mixture control and propeller.  There is quite a different start up procedure, the fuel pump operation is different, there is no carb heat and of course it has a fixed pitch prop.

The out to the aircraft and start-up.  It was a bit harder to start and certainly made a different noise.  The nose was also angled a bit further up so forward visibility on the ground was reduced slightly.  Taxiing was similar with the same steering but the controls felt much heavier.  The runway today was 36 so a long taxi out to the holding position was needed – so plenty of practice.  En-route I was asked to move to a parking area so another aircraft could pass, first time I’ve seen that.

On to power checks (which are similar to the DA-20A1 except for the propeller control) then it was line up and take-off.  Ground run was slower than I expected and it became airborne at 45Kts, which is a rather low speed.  Climb performance wasn’t great (due to the fixed pitch propeller the Instructor told me) but I was soon climbing out to 1400Ft and departing via Godstone.  Once past Gatwick airspace at Bough Beech, I climbed to 2400Ft and opened the throttle.  This aircraft is much faster than the other Katana’s and I was soon at 130Kts rather than the usual 90kts.  Backed off the throttle to 2300RPM, settled down at 110Kts and practiced some turns.  Then it was a practice stall and a few more turns so I could get the hang of the aircraft.  It needs a lot less power in the turns and was really difficult to stall, IAS was down to about 40Kts at the stall point without any flaps.  I had to keep adjusting the throttle to keep the RPM constant but I soon got the hang of it.

Then it was back to Redhill for some circuits.  I was cleared by Redhill ATC for a base join and touch and go on Runway 36.  The aircraft was difficult to get to descend needing full flap much earlier than I was used to.  Still I made a reasonable approach and even managed a rather good landing.  Then it was take-off again for another circuit.  By then I was getting the hang of it and did two more circuits both with good landings although my altitude control was not great due to the different propeller and the need to adjust the RPM.  For the last circuit, Instructor asked me to make an approach at 50Kts rather than 60Kts to practice a short field landing.  Everything was fine until the last moment when I flared slightly high and ended up bumping along the runway.  I think I’ll stick to normal approaches in future.  Then it was back to the hanger and shut down.

It’s been nearly four months since I last flew and this was a different aircraft but I was fairly happy with my performance.  Instructor obviously was too, as he signed me off to fly this type of Katana solo.  Excellent…..

G-NIKK on the parking area at Redhill 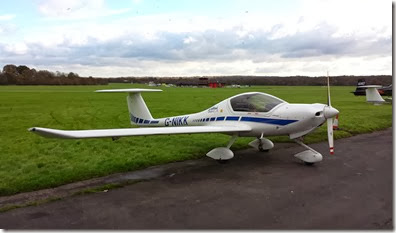 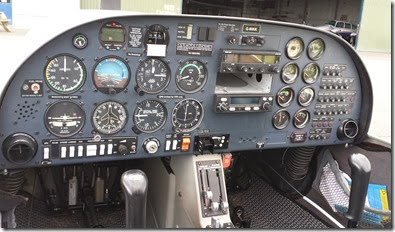