Having now passed Aviation Law and Human Factors and Performance I’m now permitted to fly solo again. At Redhill it was a beautiful day, light winds, warm weather, a clear sky and the Instructor wanted me to do a solo flight down towards Hastings. I had prepared a wind forecast and chart so had the basic information to plan a flight. As I was short on time I planned it in a bit of a rush and when finished, the Instructor reviewed it and signed it off. My revision for my Navigation ground exam must be paying off. As I want over to the aircraft for the usual pre-flight checks I was thinking it must be about a year since I last flew solo. All was well so I started up the engine and was given clearance to taxi to the hold on Runway 08R. After power checks I was cleared for take-off and as before I had the slight feeling of nervousness as the aircraft took off, climbed out over the runway and there is only me in the cockpit. Still that soon passed as I climbed to 1400ft and headed for Bough Beech reservoir to clear Gatwick airspace.

At Bough Beech I transferred to Farnborough Radar, climbed to 2300ft and set a course for Bewl Water reservoir. My navigation and timing was fine, my flying was good and I was starting to enjoy myself. The view was fantastic – it was such a nice clear day. At Bewl Water a slight course adjustment put me on track for Hastings. I decided to stay at 2300 ft and soon overflew Hastings bang on target and bang on time. I continued to fly out over the sea a bit – mainly because I could and I wanted to turn back towards the coast to take a few pictures. As I didn’t have a lifejacket I only few about half a mile out to sea before turning back towards Hastings.

Over Hastings I set a course for Bewl Water and basically flew back the way I came. My flying and navigation were accurate and I was comfortable with all the various tasks involved in solo flying. At Bewl water I transferred back to Redhill ATC for re-join and was cleared to Godstone. Over Godstone I was cleared to join downwind for Runway 08R. Approach was good and my landing was even good as well. After taxiing back and shutting down my Instructor asked me how it went. I said I was happy with my flying and in some ways it was a shame the instructor wasn’t there to see it all.

So that’s me back to flying solo again and this trip completes all the solo hours I need. Great stuff.

Flying over the sea towards Hastings at 2400ft 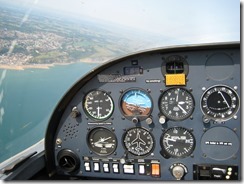 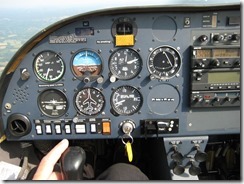 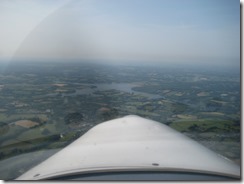