Off to Redhill again this morning – very hot, sunny and virtually no wind.  Back in the Circuit with the Instructor, one “Touch and Go” then he told me to land.  After landing and taxiing to the Control Tower, the Instructor got out and told me to do a few circuits by myself.

Runway 08R in use with Left Hand Circuits.  Taxied by myself to holding point, pre-flight checks then onto the Runway.  On Take-off the performance of the Aircraft so so much better with only one person in it, so rapidly climbed to Circuit height of 1200ft, then on to Downwind and Final Approach.  This was to be my first solo “Touch and Go” at Redhill – no problems at all, reasonable landing then full throttle to take off again.

Round one more time for another “Touch and Go”.  This one not so good, tended to drift down the runway a long way before touching down.  Still all OK. take-off and onto another circuit.  This time I decided to land as time was moving on.

Reasonable Circuit flight and reasonable approach, but again the Aircraft simply did not want to land but continued “floating” along the runway until eventually it landed.  I could not have done a “Touch and Go” as I would have run out of runway – not a good idea.  After landing, the Aircraft continued to run along the runway, so I had to firmly apply brakes – even so, I was not that far from the runway end when I stopped.

So back to the Tower to collect my Instructor and then noticed I had had a tailwind on landing.  Also thinking about it, the Jets at Gatwick were going the opposite direction to me – so Gatwick was using the Westerly runway while Redhill was using the Easterly runway.  Still tailwind landings are good practice.

In total, I had 35 mins solo flying time today.  Next lesson, I’m on to Flight Navigation – so something new to look forward to.

Also got my name on the Cubair Notice board at Redhill. 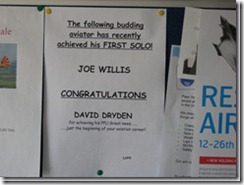 Also below a few pictures.  The tiny “dot” in the air towards the centre left of the picture is my Aircraft, with me at the controls on a solo flight. 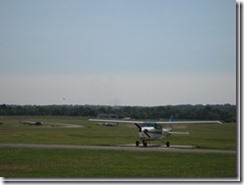 Me after the flight with the Instructor. 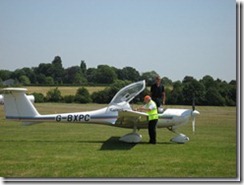