Weather today cloudy but warm and the forecast was showing clouds at 4500ft – perfect for flying.  Today’s exercise was effectively a repeat of the last one but hopefully we would not have to turn back due to bad weather.

So, route was Redhill to Sevenoaks, on to Earls Colne (near Stansted), back over Southend, to Farthing Corner, on to Bough Beech reservoir and back to Redhill.  A total of 120nm and 1 hour 20 mins flying time.

After pre-flight checks etc, taxi out to Runway 36 and take off to the North.  Turned right shortly after take off onto an easterly heading and climb to 1500ft.  Then set a heading of 068 for Sevenoaks.  Arrived at Sevenoaks turned left onto a heading of 027 over the Thames past the Dartford Bridge, and continued along over Essex to Earls Colne.  I could see Colchester and Stansted Airport in the distance.

I called Earls Colne on the Radio but got no response.  Tried again and got an answer that my message was unreadable and they passed on landing instructions.  After several more attempts at telling them I wanted to pass overhead at 2300ft and not getting a response, I gave up and turned over Earls Colne Airfield onto a heading of 182 and headed to Southend.

As we approached Southend Airport I requested clearance to pass overhead at 2300 and again had problems in being understood.  Eventually got the message across to Southend Air Traffic Control and was cleared overhead at 2300ft.  Then on to Farthing Corner.  I couldn’t see my turning point so had to do an orbit (360 degree turn) and it turned out I was directly overhead Farthing Corner Services (on the M2) which is why I couldn’t see it!  Then on past Rochester and again called for Rochester Information for clearance to pass close by the Airfield.  Again they couldn’t understand me (or the Instructor) so gave up and continued on towards Bough Beech reservoir.  Arrived at Bough Beech as planned then on to South Godstone which is the VRP approach point to Redhill Airport.  Called for clearance to land and was cleared for a long final – basically fly straight in.  Redhill had no problems hearing or understanding me.  So a reasonable approach with a crosswind to runway 26L and a reasonable landing.

The Instructor was reasonably pleased with my flying and radio work and I got to all the turn points on schedule.  Was a bit tired after flying for nearly an hour and a half which was not helped by the radio communication problems.  We reported the problems with the Radio to the maintenance team who will have a look at it.

Next flight will be a land away on the Isle of Wight and on the return leg I will need to navigate using the VOR (Radio) Navigation systems – now just need to get on with planning it. 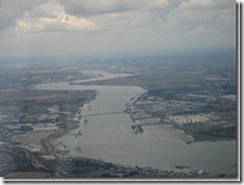 Passing by the Dartford Bridge 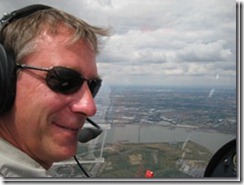 Me flying the Aircraft over the Thames 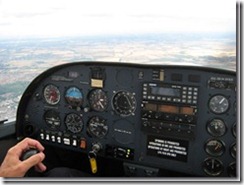 Instrument Panel in Flight showing Altitude of 2400ft, speed of 90kts and a heading of 027