This time the Instructor had set me a longer flight to plan – Redhill to Sevenoaks, then on to Earls Colne (near Stansted), then back to Farthing Corner (Kent), on to Bough Beech Reservoir then back to Redhill.  Total distance 138 miles (120 Nautical Miles) and a flight time of 80 mins.  I started the flight plan on Saturday when staying at a rather nice pub called the Tollgate Inn in Wiltshire over a pint of Moles Best beer – possibly not the recommended way to plan a flight.

Anyway, Tuesday morning was cloudy with some light rain and the weather forecast for Southend (which  I would be flying over) was cloud at 1200ft above ground level – not good as as I was planning to fly at 3000ft.  Weather at Redhill was OK, but it started to rain as I was checking out the Aircraft so had to close the cockpit cover to stop everything getting wet.  Still the Instructor thought it was worth a look so we set off, departing to the West on Runway 26L.  After take off turn 180 degrees onto heading climb to 1500ft and set course for Sevenoaks.

Arrived at Sevenoaks more or less as planned then turn left towards Thurrock and Earls Colne.  I found I was drifting to the left of track which suggested the wind was less strong than forecast so I needed to revise the track in my head as we went along.  Mental trigonometry was never my strong point and even less so when trying to fly an aeroplane at the same time.  As we crossed the Thames at Gravesend the weather started to get worse.  It was raining a lot more and the cloud base was low meaning I had to fly at 1500ft and the visibility was reducing.

Just past Thurrock I reckoned it was time to give up and go back.  Instructor agreed so it was time to do a 360 degree turn and head back.  This was harder than it seemed as I now had to work out the reciprocal of my original heading and plan and work everything backwards,  Still passed Brands Hatch (good view of cars racing around) then on to Sevenoaks and back to Redhill.

Landing was a bit ropey but safe enough then taxi back to the hanger and shut down.

Well I more or less found my way to the planned destinations even if we had to abandon the flight half way through due to bad weather.  I had problems with the RT as I wasn’t sure who to speak to or what to say – still practice will help. 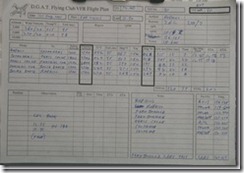 Flight Plan used during Flight (above) 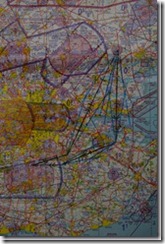