Today I had a Doctors appointment in the middle of the day and by the time that was over, it was too late to go to work.  Cubair had an aircraft available and the weather was good so off to Redhill.  I’d had a solo flight to Lydd (Kent) planned for a while but the weather hadn’t been good enough to fly it.  July has been a bit of a washout in the SE of England this year.

At Redhill, Instructor briefed me on the flight and checked over my plans.  Once all was approved and signed off, it was over to the aircraft for the usual checks and start up.  Runway 36 was in use at Redhill so that involves quite a long taxi to the other end of the Airfield – still easily done and after power and pre-take off checks it was line up on Runway 36 and take off.  Take off was uneventful, climbed to 1400ft, depart the ATZ at Godstone and turn right on to a heading of 110 for Bough Beech reservoir.  I could see Bough Beech in the distance so just headed towards that.  Flying solo still makes me a bit nervous as if I get into trouble I have to get myself out of it, there is no-one else there.

After Bough Beech switch to Farnborough East Radar, set a course of 113 and climb to 2300ft.  My route took me between Tonbridge and Tonbridge Wells, then overhead Cranbrook – which makes an excellent landmark as it has a white windmill in the town which is visible from miles away.  Then I passed Tenterden on my left hand side and it was time to contact Lydd Approach ATC.  Switched frequencies, spoke to Lydd and was cleared for an overhead join at 1500ft for Runway 03.  This routing took me over the coast, then turn right pointing at Dungeness Power Station (difficult to miss) then turn right onto final for Runway 03.

Lydd has a tarmac runway which is harder to land on than grass as the aircraft doesn't stop as quickly and is more difficult to steer.  Still did a good approach and apart from requesting to land on Runway 36 instead of 03 (caused a bit of confusion but quickly sorted) did an excellent landing.  Then it was brake and exit left to the parking area.  So after shut down I went over to pay my landing fees and there I was at Lydd.

Then it was back to the Aircraft to return to Redhill.  Take-off was easy (tarmac runways are easier than grass for take-off), turn left and climb to 2300ft.  This put me overhead Tenterden so turned left to pass overhead Cranbrook (with the white windmill) then pick up my track for Bough Beech.  Flight back was basically the reverse of the outbound flight and I turned laft at Bough Beech and descended to 1400ft to avoid Gatwick airspace.  Cleared for re-join at Redhill over South Godstone for Runway 36.  This runway is the most difficult at Redhill as the approach has to be close in to avoid infringing Gatwick ATZ.  So after a base leg join and a rapid descent it was a very short final to the Runway.  Managed to do an almost perfect landing then taxi back to the hanger and shut down.  Then a de-brief with the Instructor and left feeling rather pleased with myself for a good bit of flying and navigating. 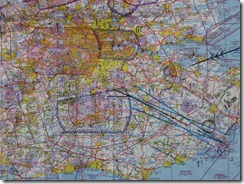 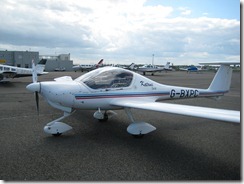 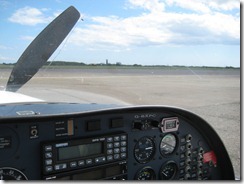 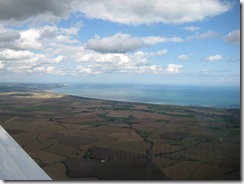 Departing Lydd and climbing to 2300ft towards Tenterden