Weather today fantastic – sunshine, but very cold, reasonably light winds from the North and only a few clouds.  The previous few days have been terrible – strong winds, dark grey clouds and heavy rain.

Got to Redhill and Instructor told me she was sending me on a solo flight.  I had planned a route out to the west from Redhill out to Guildford, south to Hazelmere, then turn back towards Dorking and from there back to Redhill.  About 50nm in total.

Runway 36 was in use at Redhill – haven’t used that runway for a while.  It’s the most difficult runway at Redhill to land on as for part of the approach you are pointing directly at Gatwick and the final approach for landing is very short.

Still after a briefing, out to the Aircraft and after usual checks call for clearance and taxi out for take off.  Always feels a bit weird when I’m on the runway waiting for take-off clearance, then opening the throttle and lifting the aircraft into the air – and I’m on my own.  If I get this wrong there is no-one to get me out of it.

Climb out to 1500ft and depart Redhill ATZ north of Reigate, climb to 2200ft and turn west towards Guildford and contact Farnborough Radar Control to tell them what I was doing..  Fantastic day for flying and the sunshine on the ground was showing the autumn colours in all their glory.  Maybe I spent too much time enjoying the view as I ended up a mile or so to the south of my planned turning point at Guildford.  Not a problem – just subtracted a few minutes from the estimated time to Hazelmere.

I set the VOR (radio navigation system) to mark my turning point over Hazelmere and ended up in exactly the right place, so turned NNE towards Dorking.  En-route I had to descend to 1400ft to avoid entering Gatwick airspace.  After transiting the Gatwick zone, climb back up to 2100ft where it’s easier to see where I’m going.  I wasn’t paying enough attention to the compass and drifted slightly to the left – easily fixed.  I’d set the VOR again, which really made it easy.

Then turn east towards Redhill, contact Redhill ATC and get joining instructions.  Did a downwind join for Runway 36 remembering the Instructors warning that if I passed over a bridge on the M23 then I would enter Gatwick ATZ and that would cause big trouble.  Identified the bridge and turned just before it.  Redhill ATC asked me to move slightly closer in which made the final approach even shorter.  Lined up for the Runway and started a fairly steep descent for landing.  Came in a bit high and a bit fast but plenty of runway available so did an OK (ish) landing and then taxi back to the hanger.

Told my Instructor I had drifted south of my first turning point and that I had used the VOR to find the others.  Instructor was quite happy with this but did say I needed to be able to navigate without a VOR but I should use them when available.

So all in all I was reasonably happy with the flight even if I probably spent too much time just enjoying flying and not quite enough on tracking ground features.  Still the VOR got me to where I needed to be – and it was a lovely clear sunny autumn day…

That’s another 45 mins of solo flying in my logbook.

Route flown (the black lines) marked on the CAA Chart 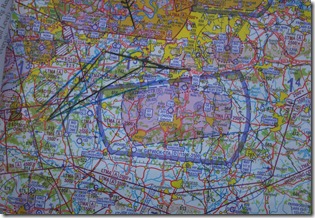