Today was very cold and sunny but with a reasonable wind blowing from the NNW.  I’d been asked to plan a fairly simple flight over Kent from Redhill, Bough Beech, Bewl Water, Paddock Wood and back to Redhill.  Instructor did a detailed check on my flight plan and asked me about, holding points, departure points, joining procedures and how to avoid infringing Gatwick airspace.  Then she said I needed to remember all this as she wasn’t going with me – I was to fly it solo.

Well this was my first solo flight away from the Airfield boundary's so if I got lost I had to sort it out by myself.  Runway 36 was in use so I was briefed on the holding points, departure and arrival procedures for that runway.

So I went out the the Aircraft, checked it over and got it ready for the flight.  Started up and requested taxi permission from Redhill Air Traffic.  They then told me Runway 26L was now in use so I had to do a rapid re-plan of holding points.  Fortunately Departure and Arrival points were the same for both runways.  After the various checks it was line up and take off.  The wind had changed to the NW but even so, there was a reasonable crosswind on the runway so had to concentrate on following the centre line.  Then it was turn and climb to 1400ft and head for Godstone – the Departure point.  Went overhead and switched from Redhill ATC to Farnborough East Radar.  Got all the radio calls out of the way, turned over Bough Beech, Set a course for Bewl water and climbed to 2100ft.

Now beginning to realise I was getting further away from Redhill and I had to deal with flying, navigating, all the radio calls and there was no-one else there if it went wrong.  Bit scary but very exhilarating at the same time.  View was fantastic – lovely clear day.

Turned over Bewl Water at 2100ft, on to Paddock Wood and back to Bough Beech.  Descend to 1400ft to avoid Gatwick airspace and transfer from Farnborough East Radar back to Redhill ATC.  All managed OK and requested joining instructions for Redhill.

ATC told me to make an overhead join but I requested a direct approach and was given approval.  Then it was into the descent and all the pre-landing checks.  Then I noticed the wind had swung back to the NNW and I was in for a crosswind landing.  Crosswind approach is a bit weird as the aircraft nose is pointing about 30 degrees to the right of the runway but I’m heading down the centre line.  Got a bit bumpy near the ground which made it all hard work.  Got the aircraft straight but started to drift left due to the wind.  Got it on the ground with a small bump, straightened it up and slowed down.  Then it was back to the hanger and shut down.

All in all I was pleased with my performance.  I got to all the waypoints on time with no errors and managed all the radio work reasonably well.  Only scary bit was the crosswind landing, hadn’t done one of these for a while.  Still it was OK – have done worse before.

So this time I get 50mins flying time with me as Pilot in Command.  Excellent stuff….

Route flown on CAA Chart below. 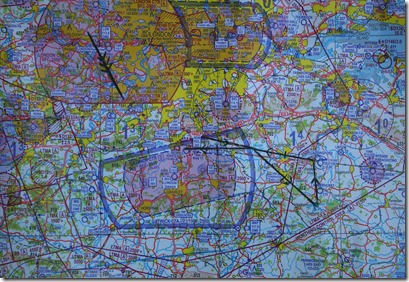