Had a flying lesson booked for 3pm this afternoon and had planned a flight from Redhill to Southend. Nice and sunny in the morning so went off cycling. Weather forecast was good so expected a good flight. Had a bit of a late night last night so a bit mentally tired but otherwise OK.

Driving down to Redhill some large clouds were building and there had been some heavy showers at Redhill. Because of the weather, the instructor was running late and it was nearly 4:15 before we were ready to go. Take off on to the west on Runway 26L and turn downwind to set a course for Sevenoaks. Then the heavens opened. The rain was so heavy it made a lot of noise hammering on the aircraft cockpit and fuselage. Also meant I could hardly see a thing – not so good at 1500ft.

Instructor got me to turn left to fly out of the rain shower and we were soon back in the sun. This had put me out of position so had to recalculate how to get to Sevenoaks.  Still, got there OK and turned left towards Southend. The Instructor wanted me to do all the radio calls to Redhill Tower, Farnborough East Radar and Southend Approach and Tower. So lots of radio work on route. Having passed my Radiotelephony exam on Tuesday I found the radio a lot easier to use. Passed through another heavy shower and after a bit of confusion on my part about how to join the downwind leg at Southend, it was on to final approach and landing.  We were a bit short on time so it was over to the Tower, pay the landing fees and back to the Aircraft for the return flight. There were more very heavy showers around and I could see sheets of rain approaching the airfield so a quick pre-flight check and take-off to avoid the rain.

Turned left for Sevenoaks and again did all the radio work.  Got a bit off track near Sevenoaks and got a bit close to Biggin Hill.  Then all of a sudden I was over Oxted and had to rush my radio calls to Redhill as it was by now very close.  Not quite sure what happened, the time from over Sevenoaks to Oxted seemed very short and I’d not turned onto my correct heading at Sevenoaks so got a bit flustered and out of position.  Not sure why, but need to be more organised next time.

Passed over South Godstone and onto a direct approach to Runway 26L.  At that point the sun came out and was directly in my eyes.  That together with the rain on the cockpit made it very difficult to see where I was going.  Landed too flat and a bit to the left on the Runway so got (deservedly) grumbled at by the Instructor.

So overall some things went well (Radio !) and some things not so well (joining at Southend, Navigation on the way back and Landing at Redhill !).  Lesson learned : flying when mentally tired is really hard work. 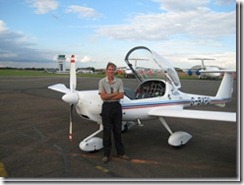 Me beside the Aircraft at Southend 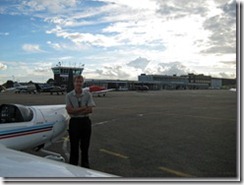