First Visit to Isle of Wight

Never been to the Isle of Wight before so rather pleased when I was set a Navigation exercise with a “land away” from Redhill to Bembridge on the Isle of Wight.  Flight was originally planned for 10th August but the weather was so bad (low cloud and rain) that we had to defer it until 11th August.

So today, nice and sunny (such a change from yesterday) with light winds and a few high level clouds.  Off to Redhill for 10:30 start and to allow time for the Instructor to check my flight plan.  All OK so after usual checks on the Aircraft it was time to start the engine and get clearance for taxi and take off to Bembridge.  At Redhill runway 26R was in use – first time I’ve been on this runway.  Anyway, take off and head west towards Reigate and then on to Guildford.

At Guildford turn onto a southerly heading running parallel with the A3 towards Portsmouth.  Got an excellent view of the major roadwork's around Hindhead where a tunnel is being dug under National Trust land in an area of outstanding natural beauty.  Then on to the edge of Portsmouth and overhead Hayling Island.  Clouds were building up a bit and had to drop to 1900ft instead of my planned altitude of 2300ft to avoid flying into the bottom of the clouds, but all OK for visual flight.

Flew out over the sea then turned right onto a westerly heading for approach to Bembridge.  There is only an “Information” Radio service at Bembridge (no Air Traffic Control) so had to work out what everyone else was doing and sort myself out for approach.  Runway 30 was in use so a reasonable landing and taxi back to the parking area.  Then pay the landing fee (£10) and treat my Instructor to a cup of tea.

Then it was time to return to Redhill.  Take off from Bembridge on Runway 30 and turn towards the East and Goodwood.  Instructor told me to track on the VOR (a Radio Navigation system) to Goodwood then track on VOR to Midhurst and Ockham.  First time I’ve used a VOR “in anger” and linked with a GPS I did find my way back to Redhill.  Just a little bit unsure of my exact position in-between on occasions.

Joined the circuit on base leg at Redhill, line up for approach on runway 26R, reasonable landing (although Instructor not overly impressed) and taxi back for fuel and on to parking area.

So how was it.  Still had problems using the Radio outside Redhill – not totally sure what to say and the language to use.  Also forgot what I was saying part way through a radio message and forgot some of the instructions back from Air Traffic Control.  Seemed to be very busy between flying the aircraft, navigating, operating the radio and working out where other aircraft were.  Still practice makes perfect and things are improving.  It’s OK until something unexpected happens (such as another aircraft reporting a position close to me and I can’t see it) then it’s hard to look for other aircraft as well as manage all the other tasks and line the aircraft up for approach landing.   When airborne, there isn’t the option to stop and have a look at a map!

Still Instructor seemed reasonably pleased with my performance so must be making some sort of progress.

I’ll be on holiday for a short while and when I get back I need to pass four exams, Radio Telephony, Flight Planning & Performance, Navigation and Meteorology.  I’ve done some initial reading and these look difficult so will all require some pretty intensive study work.  I’ve also got to plan a flight from Redhill to Southend via Sevenoaks with a land away.  So no rest for the wicked. 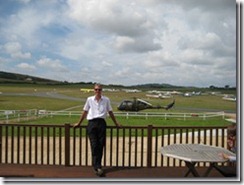 Me at Bembridge Airfield on the Isle of Wight. 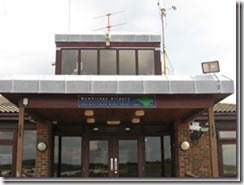 The Control Tower at Bembridge