After my successful solo land away yesterday I’m now scheduled to do my Qualifying Cross Country (QXC). This is a major step to obtaining my Private Pilot’s Licence (PPL) where I have to fly solo between three airfields and cover a minimum of 150Nm – which is approx. 172 statute miles or 278Km. My three airfields were to be Redhill, Goodwood and Southend.

For my QXC, my route is west from Redhill, then turning to the south to route to Goodwood (Chichester), then east to Bewl Water Reservoir, then north to Southend and back to Redhill. At Goodwood and Southend I will need to get a certificate signed by Air Traffic Control to confirm my airmanship, radio communications, approach and landing were all satisfactory. I’d spent the previous evening planning my flight and I needed to be in Redhill for 11:30 for a flight briefing and a review of my plan with the Instructor.

When I got to Redhill the weather wasn’t great. Cloud levels on parts of my route were 2400ft and I needed at least 2500ft before I could fly. The forecast indicated the weather would improve so the Instructor started to review my flight plan. As he went through it he was a bit concerned that I was planning to use the Radio Navigation aids whereas this was meant to be an exercise in visual flight and I should be monitoring my position by waypoints and timing. He went off to get a second opinion from a senior instructor who then went through my plan. He was also concerned about the weather and my planned use of radio navigation aids. After a bit of debate and an instruction to use visual navigation, my plan was approved as it was and the weather had improved and the cloud level was forecast at 3500ft. The aircraft I’d flown yesterday (G-BXPC) had been using oil and had a minor fault with its transponder (which is used by the Radar services) so I asked if it was the best aircraft to fly. The instructor agreed with my concerns and allocated me a very similar aircraft G-BXPD. The Instructor then phoned Goodwood and Southend to let them know I was on my way. So then it was over to the aircraft for checks and start up.

As luck would have it, I managed to break a small Perspex window in the cockpit so it was back to the Instructor for advice. He basically taped up the gap and I was clear to go. First stage was to taxi for Fuel – first time I had done this on my own. Once the tank was full, it was back to the Aircraft and get ready to go. Runway 36 was in use so it was a long taxi to the take-off point.

Despite having used the radio many times at Redhill, I made a bit of a mess of it and got a frosty response from ATC – entirely deserved. After taxiing out to the holding point for Runway 36 I told ATC that I was a student pilot (I’d forgotten earlier) and was cleared for line up and take off.

Now it was a little scary. Aircraft is accelerating down the runway, I’ve got to navigate 150nm, find two airfields, land at each and find my way back. As the Aircraft lifts off and starts to climb it’s too late – just settle down and get on with it.

Next was to climb up to 2300ft and turn over North Reigate and head west for Guildford. Transferred from Redhill ATC to Farnborough West Radar and told them what I was doing. I’d set my turning point to be a small town just south of Guildford, found that easily, so far so good. Then it was set a heading for Goodwood and at this point I started using VOR (radio navigation system) to guide me to Goodwood. I also kept a visual track of where I was just in case. Soon found Goodwood and did an almost perfect overhead join, descent, approach and landing. Feeling a bit relieved, it was over to pay my landing fees and then over to the Control Tower to get my certificate signed. They marked me as “very good”

Now for the hard bit, the long flight to Southend. This would take me past the edge of Gatwick ATZ so I needed to be sure where I was at all times. I intended to fly a bit south of my planned route just to get a bit more separation from Gatwick.

So a quick bite of my sandwich and a swig of water, then climb into the Aircraft and start sorting out my paperwork. First up was my departure instructions from Goodwood, then my flight plan to Southend and finally Southend information. Then it was a walk around check, check the oil then back into the cockpit and go through the start up procedure. Taxied over to the holding area for Runway 32 did my power checks then line up and take off. Climbed out, followed the noise abatement instructions, turned downwind, set course for Bewl Water and climbed to 2300ft.

This was a bit of a long leg on the trip so I started watching the ground features and tracking my route. I transferred to Farnborough West Radar and settled back to concentrate on flying and tracking where I was. A bit further on between Cuckfield and Hurstpierpoint I requested transfer to Farnborough East Radar and was told it was closed and to transfer to London Information instead. Fortunately I’d previously written the frequency on my flight plan.

Transferred to London Information who asked me how I was going to avoid Gatwick Airspace which is just north of Uckfield. Simple answer was I was going to fly just south of Uckfield – so I had to adjust my flight plan a bit. After passing between Haywards Heath and Burgess Hill I turned right a bit to pass south of Uckfield. Another pilot on a similar route when asked the same question by London Information responded “same as the previous pilot” Passed south of Uckfield then re-planned my heading for Bewl Water and a bit to my surprise I ended up exactly where I planned to be – directly over Bewl Water reservoir. 46Nm, 30 mins flying time, a diversion around Uckfield and I was bang on target. Just over half way there.

Turned over Bewl Water onto a heading of 013 for Southend. As this route took me close to Rochester Airfield, Instructor had briefed me on the radio procedure for Rochester and Southend. I also knew a Second World War air display was being held at Old Hay – again my route would take me over it so I had planned to fly at 2300ft which would take me over it. As I approached Old Hay, London Information advised me about the Air Display. Looking from above (2300ft) I could see lot’s of cars parked but unfortunately no Spitfires, Hurricanes or Lancaster's. Spoke to Rochester Information, told them I was passing five miles to the east and bound for Southend. A few minutes later I had a good view of Rochester just to my left so I was probably a little bit closer than I should have been – still they knew I was there so not a problem.

Crossed the Medway and then the Thames Estuary, spoke to Southend Approach and was instructed to do a base leg join. Only problem was I couldn’t see Southend Airport (it’s a big Airport) so could not be sure of how to join. Carried on and descended a bit to have a look – then I spotted the Airport just in front of me and I was approaching at 90 degrees to the centre of the main runway – not even close to what I had been cleared to do. So a sharp right turn while trying to figure out my approach and was informed by Southend Approach there was another aircraft close to me – despite searching the sky I couldn’t see it. Carried on trying to follow a semi decent track and turn onto to final but had forgotten about the 90 degree crosswind on the runway. So ended up with a bit of a zig zag approach and getting my height wrong, everything was a bit hectic and combined with the crosswind made it all a bit undignified. Still ended up landing about 1/3 of the way down the runway but as it was much longer than I’m used to that wasn’t a problem. Still as approaches and landings go, this was a long way from my best efforts. Well I’m safely on the ground at Southend feeling a bit embarrassed at what was basically a pretty poor bit of flying. So different from the Goodwood experience earlier. Taxied over to the tower and parking area and went in to pay my landing fees and to get my certificate signed.

To my surprise, they signed me off a “Good”. Either they didn’t see my botched approach (unlikely) or they reckoned I’d got it wrong, corrected it and managed to land in one piece without too much drama. On the good side, I learned something form the experience – plan your approach before you get there, don’t assume you can just work it out, especially if you are an inexperienced pilot like I am.

By the time I’d sorted myself out at Southend it was approaching 5pm so it was time to depart towards Redhill. Take off was uneventful (I’d remembered the crosswind), climbed out and turned left towards Sevenoaks and Bough Beech. Changed to London Information only to be told Farnborough East Radar was operational again, so another frequency change and transfer. Despite the fact the clouds were gathering and the visibility was slowly decreasing, I found Sevenoaks and then Bough Beech. Turned west towards Redhill, descended to 1400ft and was cleared over Godstone South for a direct approach to Runway 26L. Lined up, descended, applied flaps and did final approach checks, called “final” on the radio and even managed to make a decent approach and landing at Redhill.

Taxied back to the hanger, shut the engine down and sat in the cockpit for a moment running through a gamut of emotions - a sense elation and fatigue, mixed with terror that I had actually managed to complete my qualifying cross country flight without too much drama, landed at the correct airfields and got back to Redhill without getting lost or damaging the aircraft or myself.

Not sure I’d call the experience enjoyable, it was hard work and slightly scary at times. That said, I feel that flying solo that distance and landing at three airfields on my own is really quite something and all in all quite a major personal achievement. 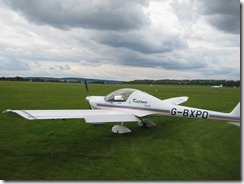 Aircraft parked at Goodwood.  (The tape over the broken window is visible on the cockpit) 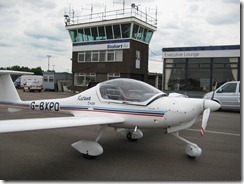 Aircraft parked in front of the Control Tower at Southend 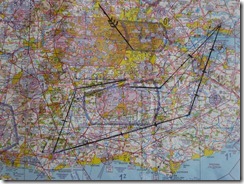 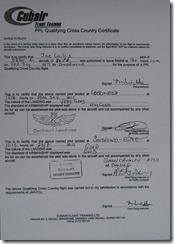 Flight Plan and my signed certificate