Today dawned bright and sunny with a few scattered clouds and light winds. The weather forecast was good with scattered clouds at 4000ft and moderate visibility. I had a solo flight planned for today routing from Redhill to Bough Beech reservoir, then on to Bexhill, Ashford and back to Redhill. I’d planned a bit of a dogleg from Ashford to Redhill to avoid Headcorn.

So over to Redhill airfield and go through flight plan and briefing with Instructor and then off to the Aircraft. Today I was in G-BXPD and runway 08R was in use as there was a light wind from the east. I did the usual walk around checks on the Aircraft ten climbed in, started up and call the tower for permission to taxi. Cleared to taxi over to G1 for runway 08R and onto power and pre-flight checks. Then its onto the runway and line up for take-off. I still find it slightly unnerving being alone in the aircraft, opening the throttle and climbing out.

After take-off depart Redhill ATZ at Godstone South VRP and then on to Bough Beech. Easy leg as I could see Bough Beech in front of me in the distance. At Bough Beech, turn right to Bexhill and climb to 2300ft as I was well clear of Gatwick ATZ. Navigation was easy as I was following a direct line from Biggin Hill VOR (radio navigation system) to Bexhill. Just as well as it was a bit hazy which made navigation a bit harder. Also transferred from Redhill ATC to Farnborough East radar service and a bit closer to Bexhill climbed to 2600ft..

Flight to Bexhill was uneventful although my altitude control could have been a bit better and as I approached the coast the visibility improved. Then it was turn left over the coastline towards Ashford and back into the slight haze. I was quite close to Ashford before I could see it –but it’s a bit hard to miss. From Ashford turn left again following the M20 and a VOR vector to Detling. My turning point was 6nm from Detling and there was a strange “cross” on the map at that point. This turned out to be a big white cross on the hillside and visible for miles – I inadvertently chosen this as my turning point. The wind must have picked up a bit from the east as I ended up a mile or so to the west of my turning point. Not a problem and easily corrected.

Then it was turn back towards Bough Beech and Redhill and descend to 2300ft as I approached Gatwick. Again some haze around but navigation easy as there is a railway line to follow. Just before Bough Beech I descended to 1400ft and transferred from Farnborough East radar to Redhill ATC. I also realised I was still following the railway line so a bit of a swift turn towards Godstone was in order. Approaching Redhill I was instructed by ATC to “hold over Godstone”. This is the first time I’ve been asked to do this so while I was figuring out what to do ATC called me again and instructed me to hold. By now I had worked out what to do, acknowledged the instruction and started flying in a circle over the M25 and Godstone. After a few minutes Redhill ATC cleared me for a downwind join for Runway 08R. There were four aircraft ahead of me so needed to do a bit of accurate flying. No problems joining the circuit and descended to 1200ft. A left turn onto base leg and left again onto finals. The aircraft landing in front of me was still on the runway during my final approach but he (or she) was doing a “touch and go” so was soon out of the way. ATC cleared me to land and I managed one of my better landings – typical, no Instructor there to see it.

After landing, taxi back to Cubair, shut down and a debrief with the instructor. He seemed reasonably please with how I’d got on (I admitted my altitude control was a bit below par) which he noted on the form.

Next time it’s a land away at another airfield with the Instructor and he wants to get me onto solo land aways – the next stage on the training programme.

Overall I was reasonably pleased with my performance, got where I needed to be more or less on time, had no problems with RT procedure and even did a good landing. Hope it is as good next time when the Instructor is sitting next to me. 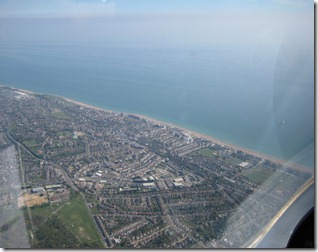 Bexhill and the Coast from 2,500ft 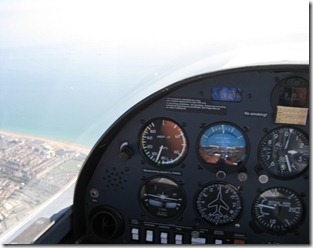 Flight Plan as drawn on my map 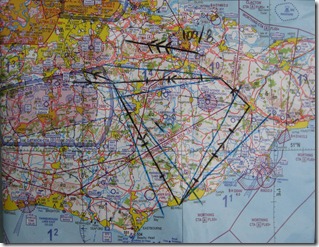