Had two flights planned for today – a solo navigation exercise out towards the west and a land away at Goodwood.  The weather wasn’t very promising with strong winds and low clouds so Instructor decided we should try a flight to Goodwood as conditions were a bit poor for solo flying.

So after usual checks, taxi out and take off on runway 26R.  After take-off, climb to 1400ft and head for departure point at Buckland Lake VRP,  Then it was set a heading for Guildford to keep clear of Gatwick airspace.  I must have been having a bad day as I turned onto the second heading which was 200 instead of the first heading which was 264.  This started taking me towards Gatwick and after a few mins Instructor asked me what I was doing.  Then realised I was on the wrong heading, quick correction and back on course.  Bit disappointed that I made such a basic error at this stage.

Anyway onto Guildford and turn onto a (now correct) heading of 200 and head south to Goodwood.  Visibility was poor and there were some low clouds about but conditions were just about OK.  Getting to Goodwood was fairly easy as there is a VOR at the airfield so I could just follow that.  Arrived overhead Goodwood at the correct time, then an overhead join, descend “dead side” and join the circuit pattern for landing.  Landing a bit bumpy bit sort of OK.  Taxi over to the parking area then onto the Tea bar for a cuppa and pay the landing fees.

After being suitably refreshed, headed back to the Aircraft and noticed the Fuel Filler cap was loose.  As there had been no indications of any fuel problems during the flight, it must have come loose during the landing,  The Aircraft had been re-fuelled after I’d checked it and it must not have been put back properly.  lesson here – if anyone touches the Aircraft after I’ve checked it – check it again.

It was very windy at Goodwood but it was straight down the runway so didn’t cause a problem.  Taxi out to Runway 24, take-off and turn right as soon as possible to comply with noise abatement procedures.  Route was to the east towards Heathfield then turn north towards Bough Beech reservoir and then turn west towards Redhill.

Flight to Heathfield went well – again I could just follow the VOR radial from Goodwood.  Wind was behind me so covered this leg very quickly – estimated speed of 124kts.  After a quick discussion with the Instructor about our position and a check on the VOR, we both agreed we were at the turning point overhead Heathfield.so turned North towards Bough Beech.

Soon passed by Crowborough and started looking for Tunbridge Wells.  By now the visibility was reducing a bit further and neither I or the Instructor could find it.  We set the VOR to ensure we didn’t drift left into Gatwick Airspace and continued looking out to work out where we were.  I was in contact with Farnborough East Radar and they called me to check my altitude.  I was at 1400ft so was below Gatwick airspace so no problems there.  A few minutes later I got an instruction from the Radar Controller to turn 10 degrees right and to stay below 1400ft – which I did.  Instructor checked the VOR and we were not in Gatwick airspace – but probably a bit closer than we should have been.  Then we passed Bough Beech on the right and crossed the railway line, so we had drifted left towards Gatwick airspace – the Radar Controller had given good advice.  Then turn towards Redhill which I could only just make out in the distance.  As we got closer i still didn’t have a clear view of the runway until I was fairly close to to it.  Landing was a bit bouncy (not one of my best) then taxi back to the hanger.

After parking up we had a look to see how we had drifted left.  Conclusion was the wind had dropped hence the left drift.  Certainly at Redhill the wind was a lot less than at Goodwood.  Another lesson learned – actual wind may be a lot different from forecast and may change during a flight.

Aeroclub at Goodwood (Below) 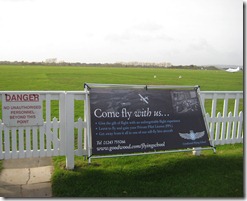 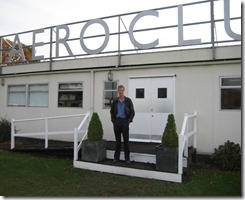 Flight Plan on Map (Below) 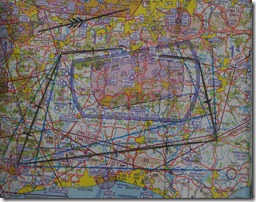