Weather fantastic today after several days of rain, low cloud and general murk.  Instructor had set me a navigation exercise from Redhill on to just north of Guildford, on to Hazelmere, on to Dorking and back to Redhill.  About 55 nautical miles and about 40 mins navigation time.

Having had problems last time departing Redhill ATZ I did a bit more preparation this time.  I knew the wind was from the East so probably Runway 08 would be in use – it was.  This means I depart over the Motorway junction of the M23 and M25.  As this is north of Redhill I had planned a route from there.  was quite pleased when that’s exactly what happened

Next step was on to a small town just north of Guildford.  I flew overhead but Instructor got me to circle and specifically point it out.  So far so good.  Then it was turn left and pass overhead Guildford and set a heading to Hazelmere,  When I got to Hazelmere, I had a bit of trouble identifying it.  I could clearly see a railway line in the town but could not find it on the map – turned out one of my pencil marks (needed for navigation) had covered the line on the map.  Still Instructor was happy I had found it and had double checked I had the correct place.

Next leg, Hazelmere to Dorking was a bit harder as the route passed into Gatwick airspace.  So I had to descend to 1500ft which limits visibility a bit.  I was looking to identify Dorking by a road junction and a railway line but no matter how I tried I could not see the railway – I found out you see a lot less a low levels.  Anyway I passed directly overhead Dorking without recognising it, so missed my turning and headed on on the same track.  It soon became obvious that I’d missed it so began to circle to try and work out where I was.  Instructor dropped a few hints about using the VOR (Radio Navigation system) but I wanted to try and work out where I was from landmarks and the map.

Anyway it became obvious this was not going to work so I set the VOR to give me a vector and distance from Biggin Hill.  Using this I soon worked out where I was and calculated a new heading to Redhill.  Then i realised I was really close to Redhill to had to circle again so I could get my radio calls in and get joining instructions – Approach from Buckland VRP, an overhead join at 1500 ft on Runway 08L, left hand circuit pattern and an early left turn.

As it happened I did a nearly perfect overhead, turned into the circuit, descended and did a virtually perfect landing – Instructor was really pleased with that bit of flying.

So overall Instructor thought I did much better than previous lesson.  I found all the waypoints except Dorking – which I flew overhead but did not see the railway line so did not recognise it.  Instructor said I should have used the VOR as soon as I knew I was out of position rather than trying to work it out, but understood why I tried that.  When I did use the VOR I got my position exactly which was good, but as I was close to Redhill everything was a bit rushed.  At least this time I worked it all out for myself (eventually) and did an excellent join, approach and landing.

Next time it’s navigating a rectangle around Gatwick Airspace and I have my Flight Navigation exam next Tuesday.  No rest for the wicked. 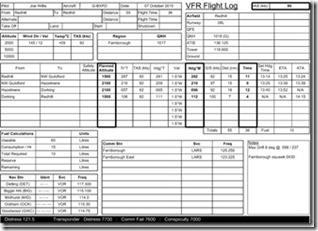