Today's navigation exercise was to fly a clockwise rectangle around Gatwick controlled airspace.  Needed to navigate accurately as accidently entering Gatwick airspace would be a very bad thing to do.

On my flight plan I had guessed that Runway 36 would be in use as the wind was from the NNE.  It wasn’t and Runway 09L was in use instead.  This meant the first part of my flight plan was wrong, but as it was only 11nm I could easily estimate a correction.  So took off and was cleared by Air Traffic Control to depart via Godstone South Station VRP.  Drifted to the left a bit but quickly made a correction and went overhead the VRP and set a revised course for Bough Beech reservoir.

Overhead Bough Beech turned right onto a southerly heading towards Heathfield – again a short leg of only 9nm.  Overhead Heathfield turned right again onto a westerly heading towards Midhurst.  My turning point was approx 5nm east of Midhurst over a small town.  This leg was a bit longer, 19nm this time.  I got a little unsure of my position about three quarters of the way but passed over a town at the planned arrival time.  Did an orbit (fly in a circle) to get a better look and decided I was over my turning point – fortunately I was….

Then it was turn north towards Guildford.  Again turning point was a small town just to the south of Guildford.  Managed to find it OK and turned right onto an easterly heading towards Redhill.

Got a bit unsure of my position and thought I was over Dorking when I was in fact somewhere else.  Fairly soon worked out Dorking was still a bit further on so carried on.  Then had a similar problem as last time – I was getting near to Redhill and still had the radio calls to make to get joining instructions – all a bit rushed again.  Air Traffic Control then gave me incorrect joining instructions and the Instructor swiftly leapt in to sort it out.  Soon swiftly resolved and then it was a direct approach to the Airfield landing on Runway 08L.  Landing was another good one so Instructor was pleased.

Well how did it go.  Better than last time but still finding it tricky to identify exactly where I am at times.  This means I’m concentrating too much on map reading which makes accurate flying and managing all the radio calls a bit harder.  Also need to keep a sharp lookout for other Aircraft – can’t do that when staring at a map.

Route drawn on my CAA Chart below (the black lines).  The area enclosed by the thick blue shape is Gatwick Controlled Airspace.  The thin blue lines radiating from my turning points (the small circles) are to help me estimate errors if I get off the planned track.  The other black line to the right (partially visible,) is the wind direction. 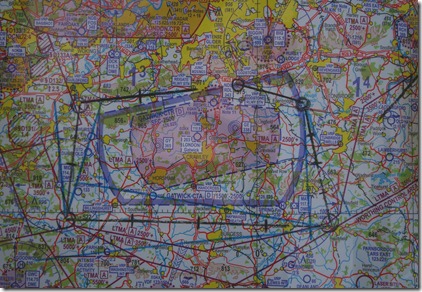