Today dawned bright, very cold and a bit windy.  So off to Redhill for a 12:00 lesson and to pick up my new (revised) Aviation Law book.  The runways at Redhill were open and despite the breeze, the Instructor said I was to do Circuits.  So first do the walk around checks on the Aircraft (basically is anything falling off) and then on to the briefing.

So, taxi out to Runway 08 L, do all the usual checks and then on to take off.  Due to the wind it was a bit bumpy but well within the capabilities of the Aircraft.  All in all I did nine Circuits with six “Touch and Go’s, two “Go Around’s” and one landing.  The two “Go Around’s” were where I had misjudged the approach and was too far down the runway to enable me to do a Touch and Go.

Overall, I felt I didn’t do to badly today with some Circuits (especially the later one’s) being better than others.  Practice makes perfect methinks and I have another lesson booked for tomorrow – weather permitting.

Today, 55 mins of flying time on Exercises 12 and 13 with 6 “touch and go’s”. 1 landing and 2 “go around’s”  As it was the last entry on the page of my Log Book, this now gives me a total flying time to date of 43 hours and 30 mins.  This is all made up of 42 hours tuition, 50 mins of solo and 40 mins of Instrument Flight.  Of this I’ve done 4 hours tuition with Cubair – all the rest of the flying time was in back in 1992 to 1995  Time for a conversation with the CAA to see how much (if any) of my previous flying time I can count towards my current training.

Picture below of Redhill Airport which I’ve taken off Google Earth – you can just make out the Runway markings and Runway 08 L is the upper and shorter of the two parallel runways running left to right across the picture. 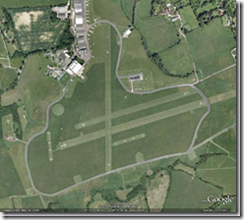