Well today (1st Dec 2009) dawned sunny but very cold.  Redhill Airport website said all runways were closed due to water logging, but I called Cubair just in case and to my surprise they said they were flying…. ?

Turned up at Cubair at midday and after a check that I could actually physically fit in the aircraft (I could – just) they said they were taking off from a taxiway rather than a runway – OK, they are the experts.  After briefing, pre-flight checks etc it was off to the taxiway.  It was narrow and curved so the instructor did the takeoff, just as well methinks.

After climbing out to 1500ft I took control and practiced straight and level flying, turns (rate 1 only), holding patterns a descent and final approach.  Aircraft is incredibly sensitive to the controls, the slightest touch with a fingertip was enough.  Thankfully the Instructor did the landing on the taxiway (curved and narrow remember…)

So, it was surprising just how tricky the turns were, yet I used to do them without thought.  Also maintaining a constant altitude took some work – again something I had mastered before.  Sensitive controls will take some getting used too.  Still some things came back and I joined Cubair Flying Club and have a proper lesson scheduled for 8th December, weather permitting

Now it’s down to reading and learning which will keep me busy between now and next lesson.  It’s fantastic though and great to be in the Pilot seat again. 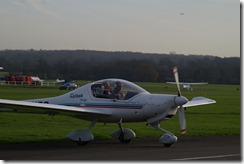 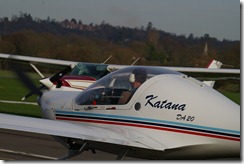